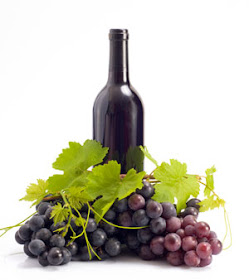 Mixing of traditional beers into Brett Saison's, Sour Brown's and other goodies are getting confusing.  The lines outlining a proper style are blurring into a muddled mess.  A honestly, this is great news my taste buds.  With homebrewer's redefining the traditional guidelines Sac, Brett, Pedio and Lacto are used for, why haven't we played with Wine yeast?  It seems like the best of both worlds.  Wine yeast contributes a lot of fruity esters, which we has homebrewer's work hard to recreate with sour aging.  The thought of taking the good with the good has always intrigued me.  Would the same benefits wine yeast gives to wine carry over into a traditionally fermented beer?  Could I create a cherry like Stout or Porter with only the yeast?  Before I could create a recipe and just "Toss" in some wine yeast, I wanted to do some research.  Luckily, The Brewing Network's Sunday Session had Shea Comfort on a couple years back.  Shea is called the  "Yeast Whisper" from MoreBeer.  If you haven't listened to it, I would.  If you have, I would listen to it again.

Wine Yeasts are in the same family as Saccharomyces cerevisiae  because of that, they behave very similar.  You do have a couple major differences/notes that you must be aware of:

When using Wine yeasts you must take into consideration the above.  The first problem most homebrewers will encounter is the maltotriose problem.  Shea talks about an enzyme "Convertase AG-300", which is fine, but searching the internet, it doesn't look to be readily available.  So this for now is out.  A way around this would be to blend the wine yeast with a beer yeast like WLP001 or WLP007 for a Stout.  For my experiment I am going to add in WLP001 (Second Gen, washed) I will need to use a non-Killer wine yeast.

When choosing wine yeast you have some choices.  But going back to the Killer, Neutural and Susceptible problem, you need to know which wine yeast your using.  Here are some common yeasts and their rating/flavor contributions:


From my understanding the Killer rating is only within the yeasts own genius.  This is taken from the BBB board:

The mitochondria of pretty much all wine yeast strains produce a small (100 MW) protein, known as a "killer-", "competitive-" or K-factor, which attaches to the cell wall of another strain of yeast, disrupting the magnesium metabolism and thereby killing the yeast cells of the other strain. About 95 percent of the commercial wine yeast strains produce a K-factor known as "K2" while 5 percent produce the "K1" K-factor. Unfortunately, the K-factor only works within the same genus, so an S. cerevisiae "killer" yeast will not inhibit non-Saccharomyces yeast like Brettanomyces. Nevertheless, commercial K1 yeast strains are useful for restarting stuck fermentations.

Update 11/15: Merlin U Ward: Just a heads up, K1B-1116 is actually K1-V1116. I've used the similar list, and that particular yeast. My impression of it was not stone fruit either, rather white grape (even when fermenting beer). I believe it is also the yeast that used to come with beer kits back in the 70's-80's and is capable of fermenting maltose


The only yeast listed above with Susceptible characteristics, I am going to focus on 71-B from Lallemand   If this is a success, I will try and locate some of the Enzyme AG-300 and expand this project into all the Killer yeasts.  I really want to try BM45, it sounds like it would be great for a quick Flanders Red.  In using the 71-B, my plan is to pitch the wine yeast at the correct pitching temps, once I have an active fermentation I will add the WLP001 into the beer.  I don't want the faster working WLP001 to dominate the wine yeast, leaving them without any leftover sugars to crew on. 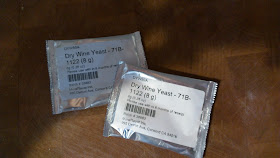 For the fermentation temp, Shea talks about keeping the beer at normal "Ale" temperatures.  The higher the fermented wort, the more wine like character is passed along into the finished beer.  The same principles of fermenting an Ale at 74 degrees, more phenols are passed into the final product.  I really want to expand on that thought.  Using my two, three gallon Better Bottles with the wort split between them sounds like a solid platform for the first batch.  One of the carboys will ferment at 63, my normal ale fermentation temp.  The other, I want to have around 68 degrees.  I'll achieve this by warming the 2nd carboy with towels inside my fermentation chamber.  Plus if I place it at the end by the door it will bump up about 3 degrees naturally.   With

Moving on to my base recipe, I can't get the thought of a nice Cherry-ish Porter to have around the house.  So my base beer will be a Classic Porter.  I've brewed Deschutes Black Butte Porter a couple times in the past and I've always had fantastic success with it.

I wanted to update this with a valid link worth checking out.  Lug Wench Brewing Companies Wine Experiment.

On to the recipe!!


Primary: 2, Three gallon better bottles.  One will be 100% WLP028.  The other will be Wine Yeast for the 1st 5 days.  Then a pitch of WLP028 will be introduced to finish off fermentation. 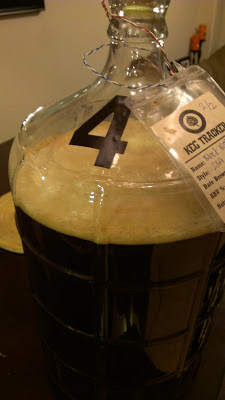 Within 3 hours of blending, I had this above.  Full fermentation going again.  I put the 2 test samples into clean bottles and capped them for a future "Tasting Session"

Thanks for Commenting, Prost!